Zeke DeVane, a 96-year-old resident of Garden Plaza at Cleveland, Tennessee, grew up in the rural town of Whitwell, Georgia. The family, who lived in a wooden house built by Zeke’s father, were all close to each other, but events soon caused him to leave his family to fight for the betterment of the world, the lives of the oppressed and the success of his country.

“I lied about my age,” Zeke said. “I said I was 18, and I was only 17. I think the recruiting officer knew, but he didn’t care. What he was after was getting young patriots to join the fight.”

Zeke and his brother John, who was 19, joined the Army together. John flew B-24 bombers and participated in important and dangerous missions throughout the war. Unfortunately, John’s plane crashed, and he passed away. Zeke honors his heroism by keeping a picture of John up on his wall.

Zeke, when he first joined the Army, was a foot solider in the 41st armored infantry. Before long, however, he was moved to the 2nd armored division, nicknamed “Hell on Wheels” The group primarily comprised of tank units that existed to wreak havoc on the enemy. This division, led by Gen. George Patton, was highly impactful throughout the war.

“They were all good people,” said Zeke. “We all looked after each other. It was a serious bunch. I guess you might say we were all patriots.”

With Hell on Wheels, Zeke started his military journey in North Africa. Specifically, in Casablanca, the largest city in Morocco. Their main purpose in Africa, in addition to fighting Nazi forces, was to strategically deter Spain from joining the Axis powers, as Spanish leadership was considering war involvement.

Zeke was a member of a security detail that guarded dignitaries such as President Dwight Eisenhower, Prime Minister Winston Churchill, British Field Marshal Bernard Montgomery and Gen. Patton, for whom he had a great deal of respect.

“He is the one man that I would do anything in the world that he said to do,” Zeke said. “I would follow him anywhere and do anything that he wanted done. He was a man we all honored.”

Next, Zeke’s division went to Rabat, the capital of Morocco, where they met the country’s sultan before traveling across Algeria and Tunisia. During this time, Zeke became a WLA rider.

The WLA riders, named for a type of Harley-Davidson, were motorcycle reconnaissance personnel. They rode their motorcycles ahead of their division, often behind enemy lines, to report enemy locations, numbers of troops and types of weaponry. This job was dangerous as the riders would go out alone, venture into unfamiliar territory and draw close to enemy troops.

“He pretty much spent all his time by himself,” said Jerry, Zeke’s son. “He stayed out ahead of the lead columns gathering information about troops.”

Zeke described his feelings towards this death-defying job, “I didn’t have time to be scared.”

The 2nd armored division’s last African destination was Bizerte, a Tunisian city. From there, they boarded a ship to return to the U.S. However, they were needed elsewhere.

“Every night the sun would set in front of us,” said Zeke. “We got bitterly disappointed when we woke up one morning and the sun was right in our eyes. We had turned around, and we went to England.”

Zeke and his fellow soldiers stayed in Tidworth barracks as they prepared for, what Zeke called, “that fateful day – D-Day!” D-Day refers to the invasion of Normandy, a region of Northern France, designed to initiate the liberation of Nazi-occupied France.

Zeke entered the fray on June 6, 1944 – the first day of the invasion. He was part of a mechanized second wave of U.S. troops that landed on Omaha Beach, which proved to be the most difficult area to capture. According to Zeke, there were 2,201 American casualties during the effort to drive the Nazis from the beach.

“When they allowed me to go on board, with my sidearm and whatever grenades I had, I followed those fellows into Normandy,” Zeke said. “We lost a lot of good men on D-Day. It made me angry. It makes you angry when your friends get killed.”

Zeke, in addition to combat, had another job on D-Day.

“I was supposed to set up a guard post for the troops who made it on in,” said Zeke. “I spent the first night ashore sitting on the banks up close to a French villa. At nighttime it quiets down, so I’m sitting there in the moonlight, and I could hear footsteps across the way coming from a farm. I just got my .45 [a .45 caliber handgun] out, and I’m sitting there in the shadows when the guy walks on up. I saw him look around through a gate and, while he’s looking around, I let him get a little closer. I didn’t say anything to him at all, but I said to myself, ‘Well that’s about far enough!’ Zeke imitates gunfire.] I didn’t kill him, but I could sure hear his footsteps going the other way. The next day, here come the American troops.”             After D-Day, Zeke’s 2nd armored division led by Gen. Patton, fought its way across Belgium, Holland, a region of The Netherlands, and into Germany. During this time, the WLA riders became famous for liberating entire towns single-handedly. The riders, as scouts, were often the first to enter a Nazi-occupied town. Upon seeing an American soldier, the Nazis assumed that entire battalions of Americans were right behind them, even if they were not. In this way, Zeke and the other riders could cause Nazi forces to retreat all by themselves and without firing a single shot.

Zeke liberated a town in Holland called Sittard. When he arrived, the Nazis fled, and the townspeople came into the streets, cheered and waved flags as they brought Zeke to meet the mayor at a local pub. They even put his picture up in a hotel lobby across from city hall.

“They considered me a hero!” Zeke said with a laugh. “The Germans were retreating something fierce!”

While in Holland, Zeke stayed with a family who he grew quite attached to.

“They were wonderful,” Zeke said with a smile. “I didn’t have to stay in a tent or anything, I stayed in this nice house – and they had a wonderful wine cellar. They had three children. One was Tina, she was 10 years old, her brother Piet [pronounced like “Pete”] was 8 years old and Rudy, the youngest one, was 6. They were wonderful children. I loved every one of them. I love kids.”

After their time in Holland, Zeke’s division followed the heart of the conflict into Germany. They were near the Siegfried Line, which was a long line of fortifications built across Germany’s western border to keep Allied troops out. The Allies eventually broke through and continued the fight through Germany to win the war, but Zeke was not present at the very end due to some devastatingly serious wounds.

On Nov. 11, 1944, Zeke was riding his motorcycle on a road in Immendorf, Germany when an unexpected attack caught him off guard.

“I was going up this road,” said Zeke. “It was one of those days with just a little misty rain, and I got some mud on my goggles. I said, ‘I’m going to stop here and go to this house and get a towel to wipe my goggles off.’ Unbeknownst to me, the Germans had that road under observation, so when I parked my good ol’ trusty WLA, I heard a shell go off. I turned around and looked, and there was a guy on the other side of the road running, trying to get out of the way. I turned to go the other way, and I got one. A mortar hit right in the street and blew me back into the building.”

When Zeke arrived in Allied territory to see a doctor, no one thought he was going to live. An officer even came by his stretcher, tossed him a Purple Heart medal and declared, “Here it is. He won’t live anyways.” On another occasion, a U.S. solider stole his combat boots due to the same assumption.

Yet, Zeke lived. In fact, he even kept his right leg, despite the doctor’s insistence that it should be amputated.

“Everybody thought I was going to die,” said Zeke. “But I fooled them all!” Zeke wanted to return to his division in Germany, but he was unable.

“My combat days were over,” said Zeke.

Zeke spent five years, two months and 23 days in military service. In addition to his Purple Heart, he earned a medal for excellent marksmanship. The 2nd armored division was also awarded numerous recognitions, by the U.S. and several European countries, for their distinguished service and bravery.

Zeke and his division were true American heroes. They exhibited remarkable bravery and dedication as they risked, and sometimes lost, their lives to help bring freedom, peace and justice to the world, and to keep the U.S. safe.

“We knew what we were there for and we did it,” said Zeke. “I think the good ol’ USA is the best. I’ll spend the rest of my days with it. Anytime I can be of service, I stand ready.”

Zeke credits his wartime success, safety and recovery from injury to God. In fact, he recalls making a deal with God while he was hospitalized that, if he recovered, he would make something of himself after the war.

So, while Zeke did the U.S. and its citizens many great services during wartime, his contributions did not end when World War II did. Instead, Zeke went on to be a positive influence for countless others, and he made a remarkable impact on American society. 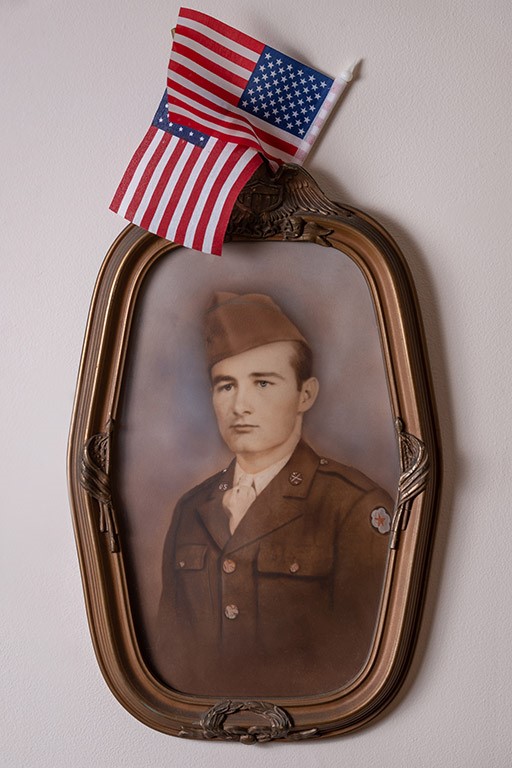