A Residentâ€™s Adventures in China 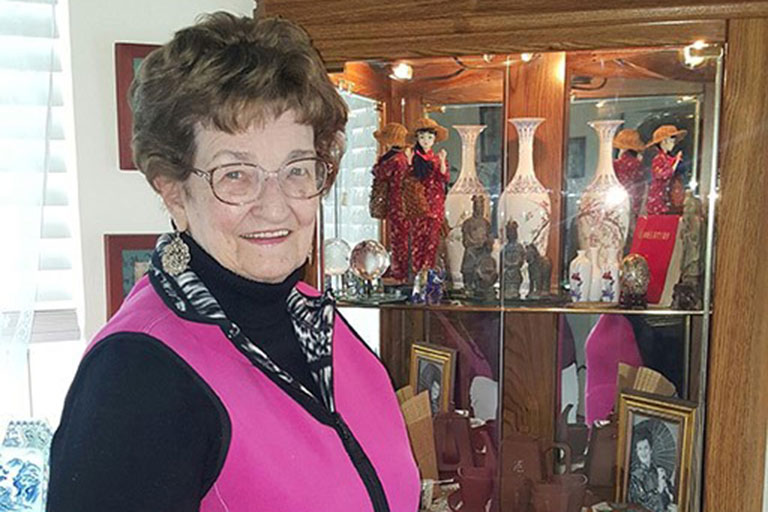 Gail Odom, a resident at the Bridge of Ooltewah, Tennessee, has lived an extraordinary life. Originally from South Pittsburgh, Tennessee, she has traveled all over the world and lived in many different places. Her favorite adventure though, was when she taught English in China for ten summers.

Gail knew she wanted to be a teacher since she was in the ninth grade. She graduated high school a year early and finished college in three years. She was 19 years old when she started her first teaching job. Her students at the time were only a few years younger than her, ranging from 17 to 18. She taught for 52 years, teaching all grades from first through college.

In 1990, Gail’s college alma mater sent out a request for teachers to travel to China that summer and teach English. She was intrigued by the invitation but wasn’t sure if she should go since her husband wouldn’t be able to attend with her. After about three weeks of her husband convincing her, Gail submitted her application. Much to her surprise, she was selected to be a part of the program. She was the only high school teacher to be selected since all the others were college professors going to scout out universities for exchange student programs. However, since Gail had a master’s degree in special ed and a master’s degree in administration and supervision, she was able to join.

After that first summer in China, Gail was hooked. She went back to teach in that same program for 10 summers between 1990 and 2002. Her last summer there (in 2002), Gail and her husband were able to teach a class together. Their students were teachers in different disciplines throughout China who had to apply to take part in the program.

Gail has many fond memories of her time and China and has quite the souvenir collection. She keeps in touch with several of her Chinese students, and many come and visit her at The Bridge. The first letter she received from China after teaching was from a troubled student she never thought she’d hear from again. She still keeps in touch with him regularly and loves his family dearly. Once when Gail was in China, this student traveled three days with his wife and little son to see her. He brought Gail a teapot set that she absolutely cherishes. She recalls that about her third summer there, some of her students bought her a bed with a mattress to sleep on since their normal tradition is to sleep on a mat on the concrete floor.

“The students were so eager to learn,” Gail remembers. “Class started at 7:30 in the morning, but some of them would be there at 6. They would stand and cheer when I would walk into the classroom.”

Gail would love to travel back to China and take her granddaughter with her, but three knee replacements and a back surgery are keeping her in the United States. For now, she loves sharing about her time in China with her fellow residents at The Bridge. They love to hear about her adventures and to look at all the amazing items she has collected.