This spring has started off different than any other. People are having to take precautions; vacations are being postponed and staying at home has become the temporary norm. Fears and anxieties have multiplied across the world by this menace of a virus, but this didn’t stop one couple’s love and commitment at Garden Plaza at Greenbriar Cove in Collegedale, Tennessee.

A few years ago, Patricia Bullock and Tom Coleman moved to Garden Plaza. Both came to community widowed, and they became involved as soon as they arrived. Patricia and Tom became friends during activities at Garden Plaza. Their friendship took off, and it led to a sweet relationship.

One year ago, around Easter time, Patricia and Tom’s relationship began to blossom. Patricia invited Tom to attend the sunrise service at Southern Adventist University. They do not consider this their first official date, but it was the first time they had gone together somewhere with just the two of them. Around August 2019, they officially started dating after being friends for a while. Both were traveling separately at that time, and they missed each other. After they started their relationship, Tom and Patricia began reading a book about miracles together.

“Anytime we would start reading, there would be a scripture at the beginning, and we would pray together,” said Tom. “Naturally I reached over and held Pat’s hand when we prayed, and I apologized after for being so forward.”

“My heart went ‘thump, thump, thump!’ just like when I was a teenager,” Pat said. “I had butterflies in my stomach, and I thought my heart was going to beat out of my chest.”

After a few months of dating, Tom decided it was time to pop the question. Patricia and Tom were getting ready to have dinner in his apartment. Tom told Patricia to sit at the table and wait for a second, and Tom went into the bathroom (the only private room) in his studio apartment. He came out minutes later with a flower and a box. He got down on one knee and put his hand on Patricia’s knee and asked, ‘Will you marry me?’, and of course, Patricia said ‘yes!’. Tom proposed with a beautiful diamond watch. Soon after, Garden Plaza staff and residents threw them a surprise engagement party with their family and friends where they had a beautiful cake and ice cream.

Months prior to Covid-19, Patricia and Tom planned a beautiful wedding with their family and friends present, but all of that came to a halt when the virus started in the United States. The wedding was planned for Easter Sunday 2020 with all their family and friends. Patricia’s son was going to give her away, and Tom was going to have family in his wedding party. The plans seemed impossible due to unfortunate events happening with the virus, but the couple knew it was the right time. Garden Plaza staff and residents jumped in to make this happen. Tom and Patricia were married on the main balcony at the community. One of their friends brought a piano and sat on a trash can to play, and a retired minister at Garden Plaza married them. The staff at Garden Plaza were able to reach out to a local florist to make Patricia’s bouquet. Family and friends watched from below in the parking lot and got to witness the wedding. Two of their closest friends at the community were the best man and the maid of honor, and Tom and Patricia wore masks during their wedding to remain safe. Even though their plans had fallen through, Tom and Patricia made the best fairytale wedding and at the end of the day became one.

“To see them form this friendship into a marriage has been amazing to watch,” said Sierra Cannon, interim executive director. “Pat would come into my office and tell me sweet things about Tom, and Tom would do the same about Pat. It’s just so sweet to see them so happy. We were so excited to have a big wedding here, but we will have a big celebration once all this passes.”

“We are so fortunate to have such a great staff that helped us with the wedding,” said Tom. “We are truly blessed.” 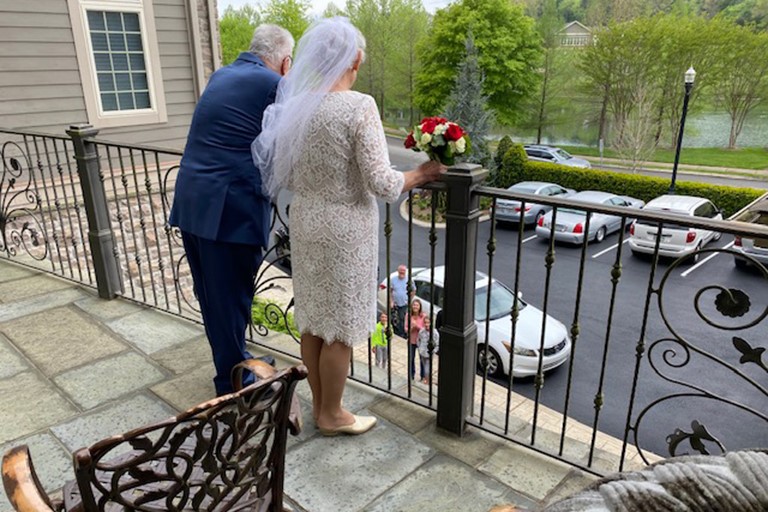