A Spark of Creativity - Chuck and Becky Everitt 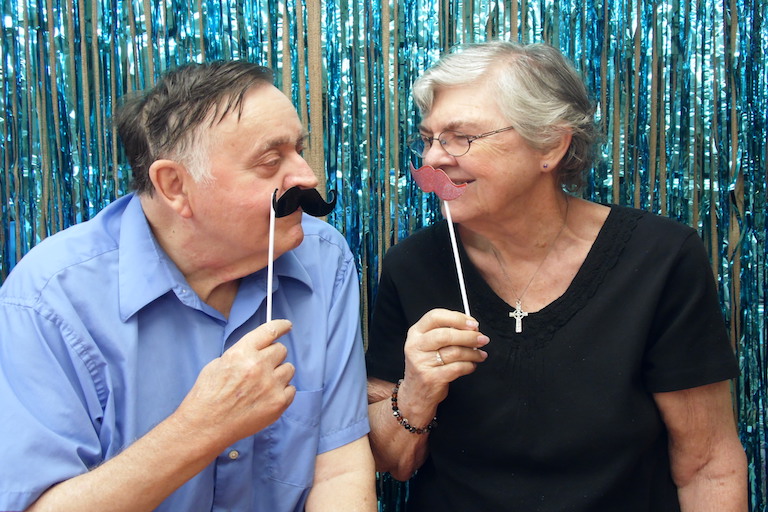 Santa may live at the North Pole, but at least two of his elves have a permanent Colorado address. The Bridge at Longmont, Colorado, is home to Chuck and Becky Everitt, who have had a hand in making and distributing more than 60,000 toys in the last few years.

As members of the Kiwanis Club of Longmont, the couple has been heavily involved with the group’s Toys for Kids program, which started in 2010. From the beginning, the program has been close to their hearts – and their home: For the first few years, it operated out of the Everitts’ garage. They also lent their tools to the cause.

Completely fashioned and assembled by club members and local volunteers, the wooden toys include everything from small cars, trains, airplanes and farm equipment to animals and dolls. Wheels and axles are added to most of the toys, so children can roll them around.

The result is as magical as Christmas.

“Some of our friends went down to Africa on a project there,” said Becky. “The little kids had never seen toys, and they were just so astounded. It was really fun to hear about that!”

The Kiwanis Club sells about 10% of the toys it makes each year at local events, to help offset the cost of the project. But the other 90% is donated to nonprofit organizations and children in need. Since 2010, the group has donated toys to children in 13 different communities in the state of Colorado, as well as five other states and nine countries. Recipients have included the Ronald McDonald House, children’s charities and Indian reservations, as well as low-income medical care facilities and churches.

In December 2018, John Spina, a staff writer with AP News, asked Chuck, a former Kiwanis president, why the Toys for Kids program is so important to him.

“It’s great to get out of the house and work with my hands,” said Chuck. “It’s very therapeutic. But what makes it really worth it is when you see the little kids get these toys. The joy in their eyes is overwhelming. You can just tell it does a lot of good.”

In the same interview, Becky noted the love that is injected into each toy they make.

“There’s something magical that happens here,” she said. “It’s just a bunch of great people helping people all over the world.”

As former teachers, helping children is something that comes naturally to Chuck and Becky. Married since 1963, the couple first met as students at Colorado State University in Fort Morgan, Colorado. At the time, Chuck was renting an apartment from Becky’s mother.

According to an interview with Quentin Young for the Longmont Times-Call, Becky first met Chuck when he showed up on her doorstep one day.

“He had on this beautiful Western shirt that his mother had made,” she said.

She, unfortunately, was wearing curlers, but it didn’t stop him from noticing her.

For the first several years of their marriage, Becky taught art, and Chuck taught auto mechanics. They went on to have three sons: Robert, William (Bill) and Charlie III.

In 1978, the family settled in Longmont, and Chuck eventually started working for the family machine shop. He also blacksmithed, using an authentic anvil that had made its way west with Chuck’s great-grandfather on a wagon, several generations ago. To share the art form with others, he did demonstrations at a local ranch and other locales, donning period attire and expertly demonstrating his blacksmithing skills for intrigued onlookers.

Like her husband, Becky’s creativity has never been confined to a classroom. An accomplished painter, she became a well-known artist in the Longmont area, often showing her paintings at local venues and selling many of them through the years.

Her love of art – especially painting – is a passion she developed at a very early age.

“When I was 4 years old,” she said, “my mother bought me a little set of watercolors and taught me how to use it. I just loved it so much, and I just kind of grew up painting and doing artwork.”

Although Becky is locally known for her paintings, she said she doesn’t have a favorite art form.

As a painter, Becky said there is no shortage of subjects around Longmont to feed her artistic soul.

“I love painting the Rocky Mountains, the outdoors,” she said. “And the flowers. I don’t do abstracts. I don’t do portraits. I do nature scenes. I make up things, sometimes, but I remember the mountain scenes so well. I just paint so many of those. I like to see what I’m painting and to let other people enjoy it, too.”

After a stroke and fall, Chuck moved to The Bridge two years ago. A year later, Becky decided to join him.

“It’s nice to be here because I wouldn’t want to be in my old house by myself,” said Becky. “It’s just so friendly, and everybody is very cordial. The staff is wonderful to take care of all the needs that people have. There’s plenty of activities, and the food is delicious!”

These days, the grandparents of two aren’t able to stay as involved with Toys for Kids as they’d like, but they have found other ways to express the spark of creativity that still burns within them.

Becky teaches art to fellow residents at The Bridge, and her classes have quickly become a favorite activity in the community.

“I just really enjoy the people who are here,” said Becky. “They all love painting and art. Everybody has something that they like to do. I enjoy teaching them. I’m just so glad that I can help people paint and that they can get something out of it.”

It’s just one of the many ways that Becky and Chuck continue to spark creativity in themselves and in their fellow residents at The Bridge.

“I think everybody has some creativity,” said Becky. “Everybody’s not the same, of course, but it is so nice to create a spark in people and get them interested in doing something instead of just sitting around and not really being excited about anything.”