Inside an Aurora independent living community, the Happy Hookers knit for the needy 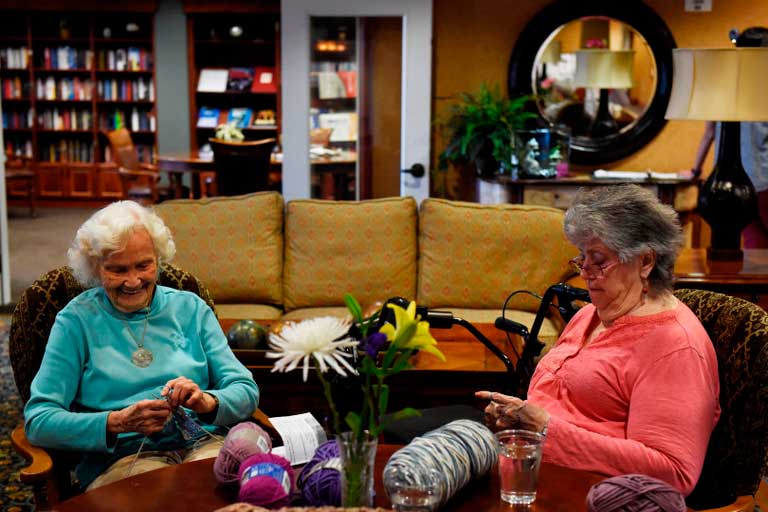 A love for knitting and crafting is the common thread that has pulled a group of Aurora women together for several hours each day for months.

The Happy Hookers of Garden Plaza of Aurora, an independent living community, meets in the lobby at 14221 E. Evans Ave. to knit hats for chemotherapy patients, crochet sweaters for infants and weave plastic mats for homeless people.

“I started knitting with everyone when I moved here about a month ago,” said resident Jean Volz. “I walked by them while they were working on a bunch of different things and thought, ‘This is great, I can come down here and knit to spend my time.’ I’ve been knitting since I was 10 years old. My grandmother taught me.”

The impromptu project began a little more than a year ago when Debe Hunt was thinking of ways to entertain her 93-year-old mother, Shirley Martin, after she moved to Garden Plaza. At first, the focus was jewelry — necklaces, bracelets, lanyards. Over time the weekly art projects transitioned to knitting, something Martin can still do in her sleep.

“My mother does not like to have idle hands,” Hunt, 67, said. “So I come here to help keep her busy, and then all of these other ladies started to join us.”

They made 85 blankets for children last winter and are making sleeping bag mats woven from plastic grocery bags to give to people with Doctors Without Borders.

“We can give patients store-bought items, but to have something that’s handmade is truly special,” said Stephanie Manley, volunteer programs manager at the Medical Center of Aurora. “Handmade things come with a wish that someone wants you to be better, and that has a very real, positive impact on their health.”

The Happy Hookers thrives on donations. The women occasionally sell jewelry to pay for supplies, but they are always in need of yarn and crafting tools.

“We don’t count how many we make,” Hunt said. “We just go and go until we have too many and need to clear out some space. We were just doing things for ourselves, and then as the group grew, we decided to start making things for donations. We’ve got all this time and all this talent. It can’t go to waste.”

Christina Lynch has been crafting since 1972.

“I used to make travelling jewelry pouches and sell them at craft shows,” Lynch, 87, said. “They were made out of fabric and had eight small pockets on the inside, and so when you went some place you put all your little stuff in there. I made thousands and thousands of them up until about three years ago.”

A few months ago, she saw Martin and others sitting together around a large wooden table at Garden Plaza, chatting and creating, and decided to join them.

“I’m happy to join this group here,” Lynch said. “It gives you someone to talk to.”

Sara Lewis, 74, prefers to knit. She knits for six hours with Martin every day.

“I’ve been knitting since I was 20,” Lewis said. “I picked up a book and taught myself. And so now I’ve been knitting, crocheting, doing needlepoint — you name it — ever since. I’m slower than Shirley, but so is everyone else. I can make a baby hat in a day or two, but Shirley makes two a day.”

That’s just how she is, Hunt said of her mother.

“My mother has always been artistic,” Hunt said. “My dad was a general contractor who built homes, and one time she mosaic-tiled the whole inside of a swimming pool with a picture of those people’s children. I can still remember her doing that.

“It took a long time,” Martin said. “They had 13 children, and I (made mosaics) of them, their bodies and all — all around the side of the pool.”

Hunt said she hopes to expand the group to the women’s families and anyone in the metro area who wants to join.

“We’re trying to get some of our members to bring their grandchildren in and teach them before it becomes a lost art,” Hunt said. “We’d love all the help we can get.”

Story and photos originally published on May 9, 2017, by The Denver Post. http://www.denverpost.com/2017/05/09/happy-hookers-garden-plaza-aurora/ 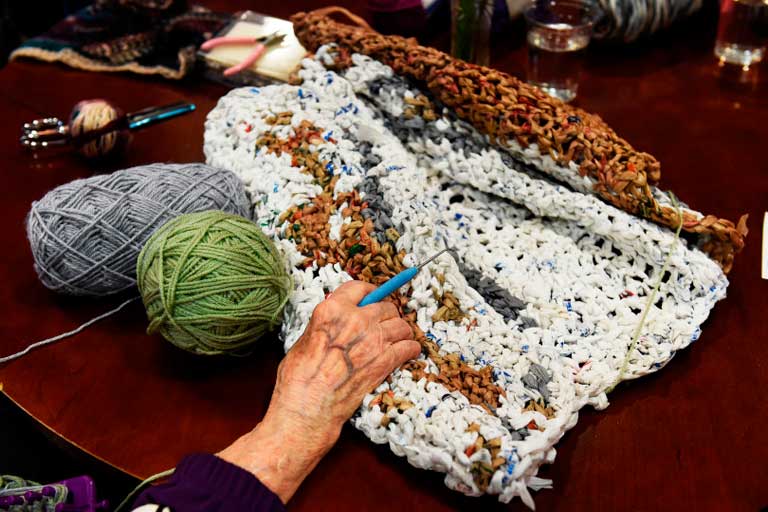 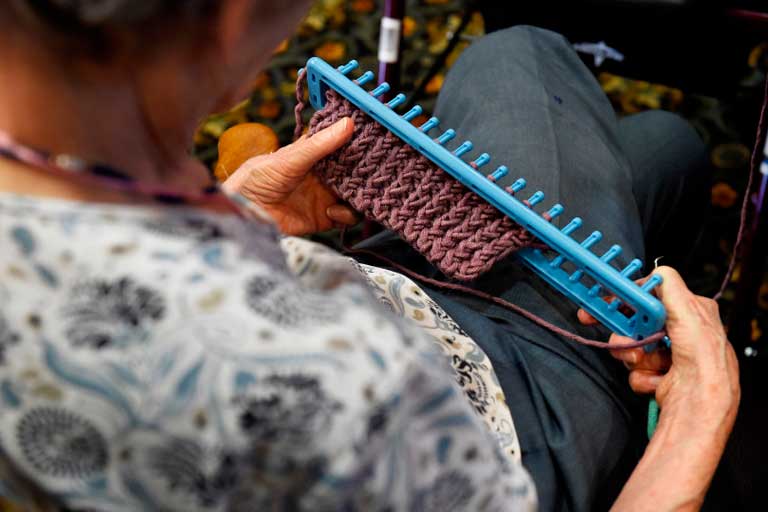 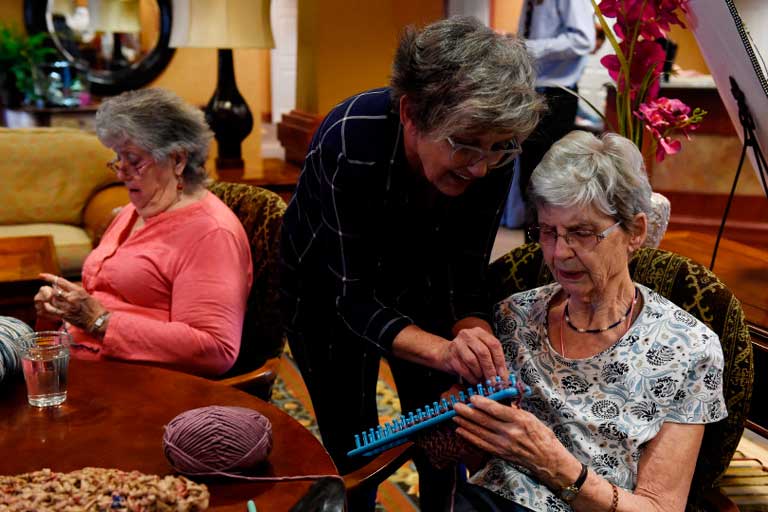 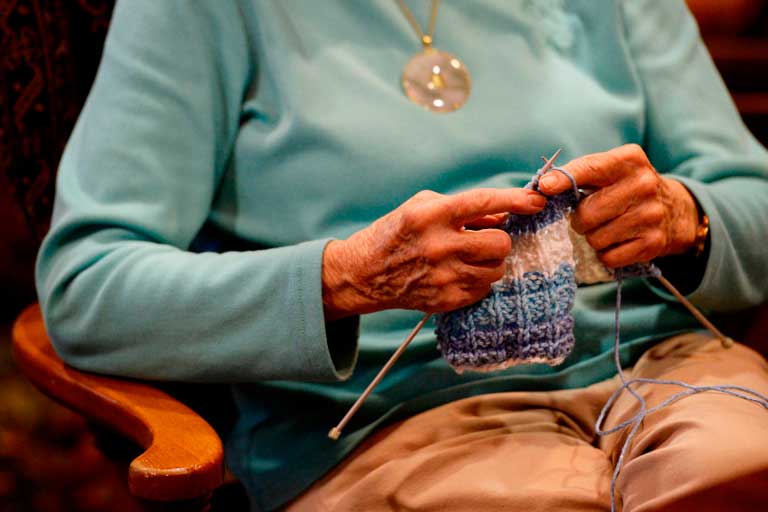 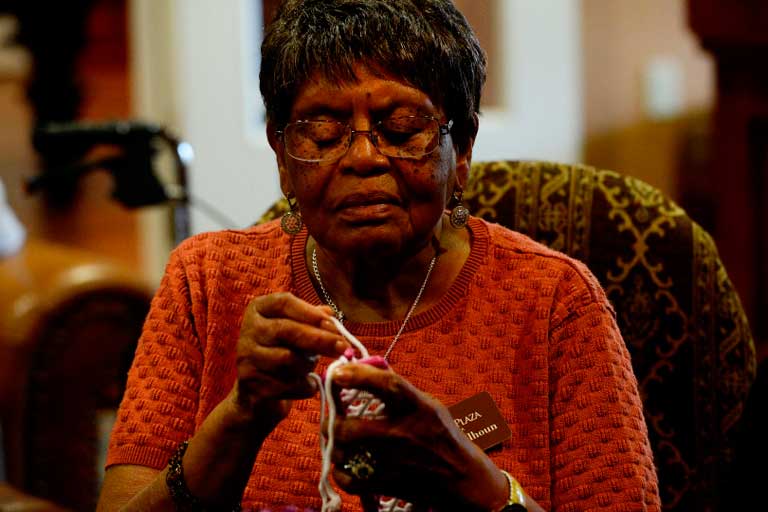