Walk a Mile in My Shoes 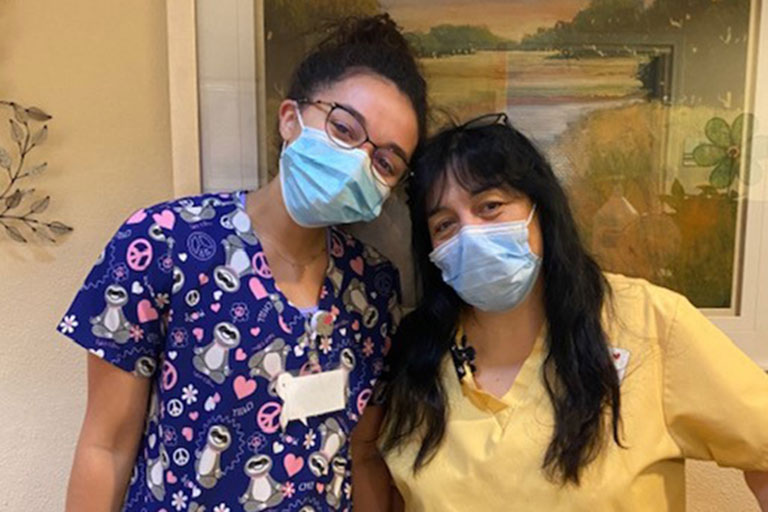 After witnessing the effects of Katrina, many Texans were scared and chose to leave Houston with their families, ahead of the storm. As a result, Life Care Centers of America facilities in the area were threatened with staffing challenges and requested help. Many were afraid to fly into an area that others were leaving, but Forrest Preston, who founded both Century Park and Life Care, was determined to ensure his residents were cared for.

I worked for Life Care at the time, and I remember the amazing group of caregivers that volunteered to fly with me to Houston. Some, who worked in maintenance, were tasked with boarding the windows. Our group also included three nurses and three other staff members who were willing to do anything.

Driving through the deserted city was my first experience seeing beautiful highways void of vehicles. The stillness was bone-chilling. Everyone had left. But at Life Care's Garden Terrace facility, the staff that remained were working hard. Many had worked 24/7 for three days straight, and they were exhausted. When we arrived, the home team nestled on therapy mats spread out on the cold floor; sleep had become their long-lost friend.

RN Amy Mantooth and I were assigned a wing of 48 residents by ourselves. Amy was the priceless nurse assigned to deliver medications, and I was the certified nursing assistant.

With windows closed to the unknown, and howling wind outside, I geared up for my third round of the night. It was two o'clock in the morning, and all the residents in my care were bed-bound. After 12 long hours, I was waning when I stopped in the room of a resident named Jack, the last room on my rounds before we were scheduled to trade shifts with the home team.

Jack had been asleep during my first two rounds, but as I walked into his room for the third time, I knew something was wrong. One look at his eyes signaled me. I immediately began my ritual with wipes and brief in hand. I could hear the outside boards on the windows rattling in the wind, but all I could see were the liquid gray and blue eyes of Jack. He watched me as I cleaned him; he watched me to see if I really saw him. For one small minute, his eyes strayed to a picture and mine followed. On the wall of his desolate room was the lone photo of a young, elegantly handsome Air Force pilot. He was standing proudly by his plane, wearing medals that had no meaning to me. But then I saw it. Next to the picture was a purple heart! Jack looked into my eyes, and at that moment I really saw him. Tears fell for both of us as I realized how honored I was that I was chosen to care for him.

Many may think they have walked in the shoes of a caregiver, but I know I can't scratch the surface of those courageous few. The power to honor Col. Jack not just as you see him, but as he wants to be seen lies in YOUR beautiful eyes. The ability to calm his fear from the storm and the courage YOU exhibit when you show up for him is matched by his own courage.

I learned that day that YOUR shoes are too big to fill. Each day, you bring love, courage, hope and peace. And YOUR ultimate reward is the love you will see in the eyes of those staring right back at you.