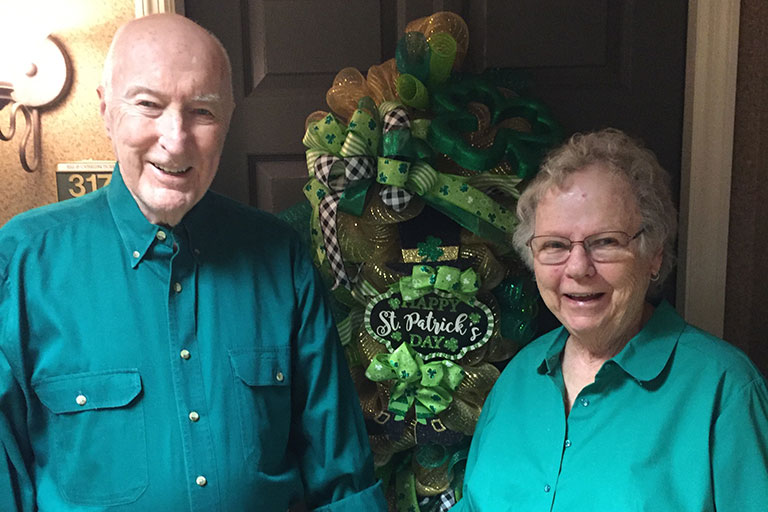 Saint Patrick's Day looks different in all households. For some, it's wearing green to work and to school; for others it's a four-leaf clover and a toast; but for some, it's a symbol of heritage, hardship, and celebration. Century Park Associates is lucky to have a vast array of residents from many different backgrounds and we are so excited to share the story of two certain residents whose Irish heritage is something they are proud to celebrate.

Catherine and Bill Tighe are current residents at Lake Pointe Landing and have been married for 63 years. Bill is second-generation Irish and Catherine is first-generation and they both are very proud to be of Irish decent. Catherine says her parents came to America as 17-year-old immigrants; they were strong and independent and came to nobody. They faced racism and segregation, with signs around the city stating "Irish need not apply". Nevertheless, they persisted. Catherine's mom picked up many menial jobs, doing whatever she could to get by. Today Catherine states she has that same Irish resilience and independence.

St. Patrick's Day is important for them because they get to celebrate not only their heritage but also their religion. Bill says many often forget that this is a religious holiday; being Catholic is an important part of their lives and their family.

Their St. Patrick's Day highlight is when they were growing up in New York City and were a part of the annual St. Patrick's Day parade where they'd march with their schools and school bands down 5th Avenue. They say they celebrate the holiday every year and they are currently planning this month's St. Patrick's Day celebrations after having received the second COVID-19 vaccination.

Catherine and Bill have been residents at Lake Pointe Landing for 6 months and absolutely love it! It is their 8th home in their married life and they plan to stay there. We are so lucky to have them as a part of our Century Park family! Happy Saint Patrick's Day!