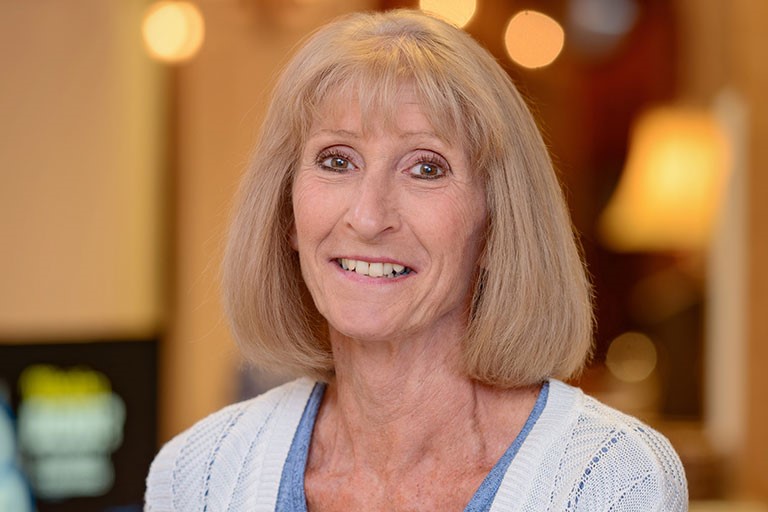 Century Park Associates is proud of the many talents of our residents. The following story was written by Emily McDonald, a former journalist now residing at Garden Plaza of Greenbriar Cove.

Corinne Stanton gives credit to the Lord, a dedicated doctor and a “popcorn angel” for saving her life.

Now she’s part of a campaign to save other lives.

Stanton was working as a receptionist at Garden Plaza of Greenbriar Cove when she suffered a stroke. She wasn’t able to talk and was in and out of consciousness.

Amy Grayson, a caregiver for a resident at the independent living community in Ooltewah, Tennessee, was at the popcorn machine, noticed Stanton’s condition and immediately called 911.

“Get here in five minutes,” she told the dispatcher.

“I call her my popcorn angel,” Stanton said.

“That was God,” Stanton attributed.

Stanton was taken by ambulance to the Southeast Regional Stroke Center at Erlanger Medical Center. The center is “the busiest stoke center in the country,” covers a 55,000-square-mile area and includes a network of 75 hospitals, said Dr. Blaise Baxter, interventionist neuroradiologist at the stroke center.

Stanton was diagnosed with an emergent large vessel occlusion (known as an ELVO), a blood clot in the vessel.

The affected part controlled speech, so Stanton was aware of what she wanted to say but couldn’t vocalize it.

“It was very frustrating for her,” Baxter said.

Baxter performed a cutting-edge procedure known as a mechanical thrombectomy to break up the clot. He was among those who collaborated to develop and improve the devices used to perform the procedure and the techniques of performing it.

“By bringing the blood supply back, the patient can recover,” he said during a talk at Garden Plaza in May.

The procedure is now “the worldwide standard of care” for ELVO. There wasn’t much to do for stroke before the procedure was introduced in 2015, he added.

Now Dr. Baxter travels around the world training physicians to do the procedure.

“It is the No. 1 cause of disability in the state and in the nation,” Baxter said. “Stroke is a medical emergency with a time-dependent treatment that can help return people to normal living. There is a 24-hour window from onset to treatment.”

The day after the ELVO, Stanton said, “I didn’t realize it was a procedure. I felt normal but a little tired.”

Although she was in the hospital for five days, Stanton required no therapy and was back to work in a month.

“My biggest blessing is to see what an impact on a life these treatments can do,” Baxter said.

At Garden Plaza, Baxter showed a film that includes Stanton’s story and is part of an international campaign, Get Ahead of Stroke, to promote the need for emergency treatment.

“This is so important for everyone to know,” Stanton said. “It could happen to you, your friends and residents here. I want to help spread the word.”

Part of the campaign uses the acronym FAST to raise awareness of stroke:

F – Changes in the face

A – Inability to lift the arms

Stanton’s participation in the Get Ahead of Stroke campaign has included trips to New York and Nashville for herself and her husband, William. The trips were sponsored by Penumbra, the company that manufactures the device Baxter uses to perform the procedure.

“There are so many different stories,” Stanton said. “There were people from all over the country who have had the procedure.”

The visit to Nashville included appearing before the Tennessee Legislature and at a Randy Travis benefit concert to help fund stroke awareness. Travis has had a stroke and heart trouble, Baxter said, and can’t sing anything but “Amazing Grace.”

Because of that amazing grace and those amazing people, Stanton is still here for her family and the residents at Garden Plaza.